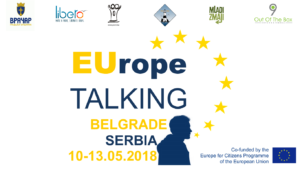 The city municipality of Vračar and CSO Libero  , in partnership with the NGO PRONI from the Brčko District, NGO Interkultura from Skopje, the Public Institute Mladi Zmaji from the city of Ljubljana and the international organization “Out of the Box International”, as well as the representatives of local governments from these towns, have implemented project “EUrope Talking” in the period from May 10 to May 13, 2018. This project is supported by the “Europe for Citizens” programme of the European Union.

Around 400 young people from Macedonia, Bosnia and Herzegovina, Slovenia, Belgium and Serbia who took part in the project, as well as numerous interested citizens, had the opportunity to get to know European Union through the diverse content within Europe Talking project and to gain access to objective and accurate information on values and the political system of the EU. A number of workshops and intercultural activities were realized at various locations in the municipality of Vračar through which the young people had an opportunity to talk about the EU and to exchange their experiences in this area. The central event within the project was the “EUrope Talking Live Library” held on the premises of the National Library of Serbia. All participants had the opportunity to rent a “book” free of charge on a topic of interest to them regarding the European Union and to break their prejudices through the discussion with them and to inform themselves about the way in which the institutions of the European Union function. The fact that in the public opinion for many years there has been a series of prejudices, stereotypes and misconceptions about the way the European Union and its institutions functions, has led the organizers to give a chance to young people to get to know EU from reliable sources and in a direct communication.

The realization of “Europe Talking” project was supported by the active participation of representatives of  the Ministry of European Integration of the Government of Serbia, EU Delegation to Serbia, National Library of Serbia, Office for Cooperation with Civil Society, Serbian Chamber of Commerce, Council of Europe, EU Info Center, Regional Development and European Integration Agency  and Institute for European Affairs. 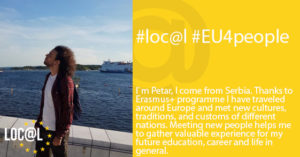